Pro-Trump ‘Enemies of the People’ doxing site is still active

Enemies of the People, the website inciting violence against U.S. officials who refused to support the President’s claims to voter fraud, is still active and continues to expose personal details from more individuals.

The main site went offline shortly before a report from the FBI emerged saying that Iranian actors were “almost certainly” behind the campaign but just days after the New Year, it was back up publishing personal information.

FBI is on the case

In a new PSA on Friday, the FBI alerted that “Enemies of the People” operations are ongoing and that the actors are threatening the lives of U.S. federal, state, and private sector officials using direct email and text messaging.

The agency stands by the initial assessment that Iranian actors are behind the website, adding that an official received direct threats and a screenshot showing “an apparent text communication between the EOTP actors and an unidentified individual in the United States purportedly supporting the operation.”

The FBI identified additional accounts used to distribute threatening messages or to amplify the campaign. Below is the larger list:

The campaign may embolden some U.S. citizens to actions intended to disrupt a peaceful transition of power to the Biden administration or to harass, harm, threaten, and even attack individuals listed on the website, the FBI says in the alert.

Admins reply to FBI and CISA

On January 3, the admins of Enemies of the People revived it with a message denying a connection to Iran and calling the theory a distraction from the government agencies. 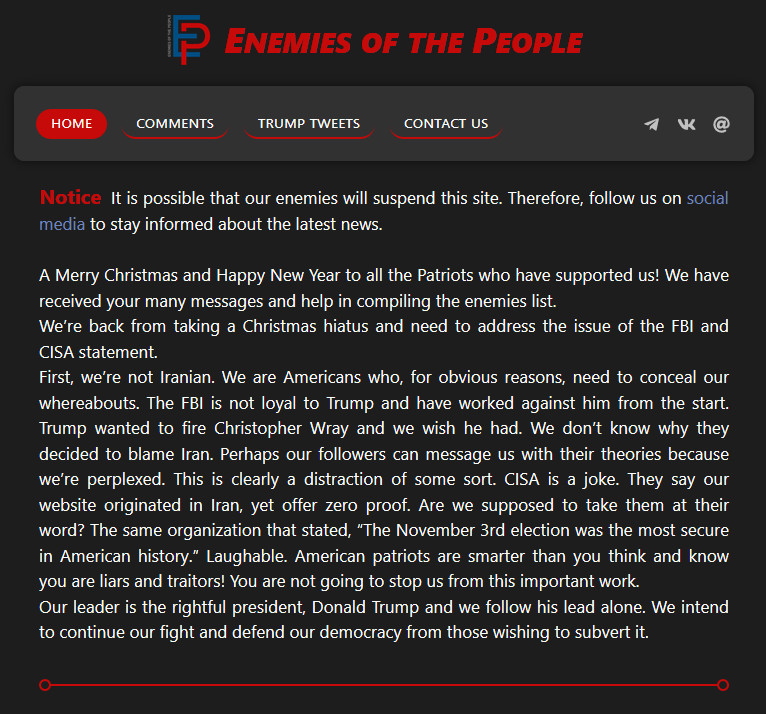 Since its return, the site was initially hosted at a service in Moldova. A few days later the admins switched to hosting provider JustHost based in Moscow, Russia, where it is still alive.

A Telegram channel is also available, sharing images with the latest individuals listed as “enemies” and their personal information exposed on the website.

Among the newest individuals doxed on the “Enemies of the People” are Georgia Secretary of State Bradford Jay Raffensperger, his counsel Ryan Germany, and U.S. Senate Majority Leader Mitch McConnell.

Details include email contact and home addresses. All pictures have a target painted on top, making it look like a hit list. Below these details, the admin provides their reason for doxing the individuals.

The goal was to spread these posts over multiple channels. Apart from Telegram, whoever is behind the website also tried to push the info through the Russian social network VK. The network blocked the account for violating the terms of service.

Fueling this campaign was possible through contributions from supporters to a Bitcoin address published on the website. Transactions to the wallet start on May 3, 2020. They end on January 1, 2021.

The admin justified the need for funding by saying that “Enemies of the People” was an expensive project and that they needed to make a large downpayment to kickstart operations that “deal with the treason in our country.”

The wallet accumulated close to $15,000 in Bitcoin at today’s value and the owner spent almost immediately the more significant sums received from supporters. The final balance currently reads $1.80.