The number of attacks had slowed down after the winter holidays, but after the past two weeks, it’s evident that the ransomware attacks are back at full speed.

Over the past two weeks, we had some significant attacks, including attacks on Discount Car and Truck Rentals, an alleged attack on Kia Motors/Hyundai, UL, TietoEVRY, Ecuador’s Ministry of Finance, and its largest bank, Banco Pichincha.

A recent ransomware attack at Automatic Funds Transfer Services (AFTS) also led to a series of data breach notifications from US cities that used them as a payment processor.

Finally, Mandiant reported that recent Accellion FTA breaches had been conducted by hackers affiliated with the Clop ransomware operation.

In a win for law enforcement, an operation between the USA, France, and Ukraine has led to numerous Egregor members’ arrests, practically shutting down the ransomware operation.

On the technical side, we learned that Ryuk now has worm-like functionality allowing it to spread to other Windows devices.

A ransomware gang who says they stole unencrypted source code for the company’s most popular games and then encrypted CD Projekt’s servers claims to have sold the data.

Canadian Discount Car and Truck Rentals has been hit with a DarkSide ransomware attack where the hackers claim to have stolen 120GB of data.

Cerberus released a decryptor for the Tortoise Ransomware.

A joint operation between French and Ukrainian law enforcement has reportedly led to the arrests of several members of the Egregor ransomware operation in Ukraine.

Kia Motors America has suffered a ransomware attack by the DoppelPaymer gang, demanding $20 million for a decryptor and not to leak stolen data.

Petrovic found a new variant of the Makop ransomware that appends the .vassago extension.

A ransomware attack against the widely used payment processor ATFS has sparked data breach notifications from numerous cities and agencies within California and Washington.

CIS now offers free ransomware protection to all US hospitals

The Center for Internet Security (CIS), a non-profit dedicated to securing IT systems and data, has announced the launch of free ransomware protection for US private hospitals through the Malicious Domain Blocking and Reporting (MDBR) service.

UL LLC, better known as Underwriters Laboratories, has suffered a ransomware attack that encrypted its servers and caused them to shut down systems while they recover.

Canadian undergraduate research university Lakehead has been dealing with a cyberattack that forced the institution earlier this week to cut off access to its servers.

Finnish IT services giant TietoEVRY has suffered a ransomware attack that forced them to disconnect clients’ services.

The analysis that follows is based on an examination of ransomware doxxing victims whose identities were published between September and December of 2020. The data for this blog post was collected from 100% public sources. Unlike the majority of research on cyber extortion trends, which is based on information collected from self-identified victims of ransomware, these data points are collected from the threat actor’s own public ledgers of victims and are not subject to the same limitations of self-reporting. At this time one year ago, only two or three ransomware gangs had developed the practice of naming-and-shaming victims who failed to pay the ransom.

CD Projekt Red announced today that they are delaying the anticipated Cyberpunk 2077 Patch 1.2 to the second half of March 2021 due to their recent cyberattack.

Business jet maker Bombardier is the latest company to suffer a data breach by the Clop ransomware gang after attackers exploited a zero-day vulnerability to steal company data.

The recent cyberattack that forced the Dutch Research Council (NWO) to take its servers offline and suspend grant allocation processes was caused by the DoppelPaymer ransomware gang.

Looking for the Snoopdoog ransomware

S!ri found a new ransomware that appends the .assist extension. 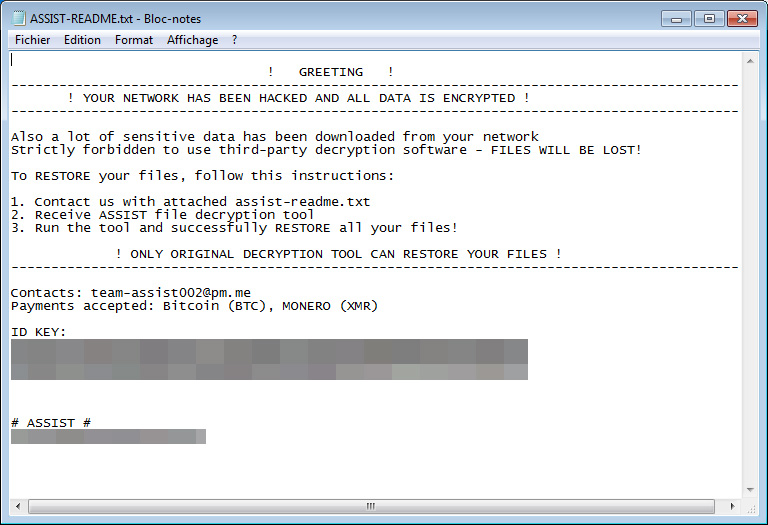 A new Ryuk ransomware variant with worm-like capabilities that allow it to spread to other devices on victims’ local networks has been discovered by the French national cyber-security agency while investigating an attack in early 2021.

​A hacking group called ‘Hotarus Corp’ has hacked Ecuador’s Ministry of Finance and the country’s largest bank, Banco Pichincha, where they claim to have stolen internal data.